The Dangers of Distracted Driving

What IS Distracted Driving?

Road safety is a responsibility we all share, and when not taken seriously, can lead to dire consequences: more than 38,000 people die each year in crashes in U.S. roadways, making road crashes the leading cause of death for Americans aged 1-54. Another 4.4 million on average are seriously injured. While the law team at Goldberg Noone Abraham will be here for you should you ever be involved in an accident, we wish to help prepare you avoid this situation if ever possible. One of the most effective ways to ensure that you are driving safely is to always remain focused on the road and on the other drivers around you, as distracted driving is an all too deadly phenomenon here in the U.S. The Center for Disease Control (CDC) defines Distracted Driving as driving while doing another activity that takes your attention away from driving. Distracted driving can significantly increase your likelihood of being involved in a motor vehicle crash.

What Kinds of Distractions Are There?

A distraction is anything that can take your attention away from driving. The most seen distractions while driving include texting, utilizing a cell phone, using a navigation system, eating, putting on makeup, etc. Engaging in any of these distracting behaviors significantly increases the likelihood of you, your passengers, and others being involved in an accident.

There are three main forms of driver distraction:

Texting requires all three forms of driver distraction, making it one of the most dangerous and well-known forms of distracted driving. Distractions comes in many forms, however, as other common distractions include: tending to or interacting with children and other passengers in the car, eating, applying makeup, focusing on an event outside of the vehicle such as a car crash, having unsecured pets in the car, adjusting entertainment or climate controls, checking your GPS, or even daydreaming (source).

Who is Most at Risk for Distracted Driving?

Unfortunately, this is one stereotype that holds true: statistically, young adults and teen drivers are most at risk for engaging in distracted driving. In the United States in the year 2018:

The CDC's Youth Risk Behavior Surveillance System (YRBSS) monitors health risk behaviors among American high school students, including texting or emailing while behind the wheel. A 2019 study by the YRBSS found the following: 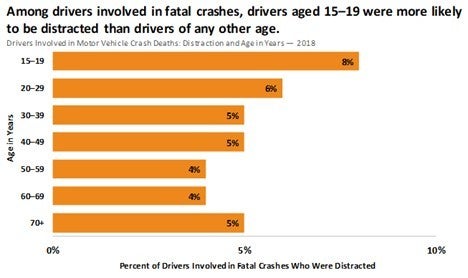 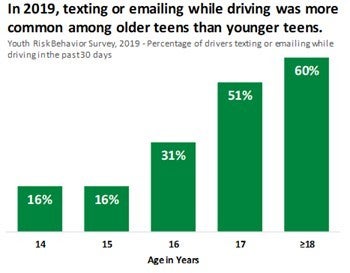 As of July 1st, 2019 in the State of Florida, the Wireless Communications While Driving Law (section 316.305, Florida Statutes) took effect; this law allows law enforcement officers to stop motorists and issue citations if they are texting while driving. According to this law, a person may not operate a motor vehicle while manually typing or entering multiple letters, numbers, or symbols into a wireless communications device to text, email, and instant message.

Texting and driving can wait. No message is worth you receiving a ticket, you being involved in an accident, or even losing your life.

How to Prevent Distracted Driving:

Nobody gets behind the wheel with the intention of getting distracted while driving, but it is a very real possibility for every driver, especially in an age when most own a cell phone. If you are driving and are concerned about retaining focus, the CDC recommends the following guidance to drivers: