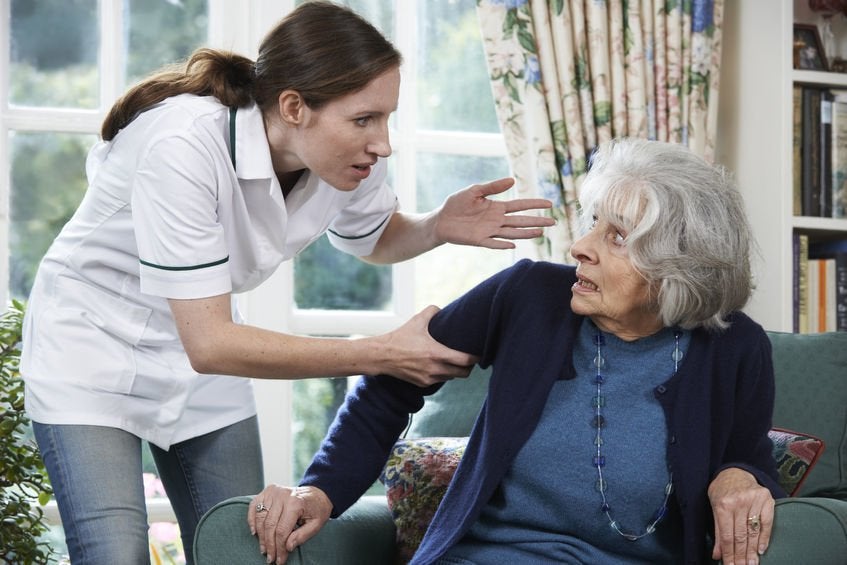 That's really the only thing one can think of after learning how some corporations structure the purchase and operational needs of hundreds of nursing homes.

For-profit nursing homes and senior care facilities can be a very lucrative business for their corporate owners. But the way a lot of them structure their business entities is causing the care and safety of our nation's elderly to deteriorate at an alarming rate. All so corporate officers see big financial dividends and line their pockets at the expense of our family and loved ones.

A recent investigative report conducted by Kaiser Health News* in collaboration with the New York Times uncovered some shocking facts about how corporate-owned nursing homes are operated.

An elderly nursing home resident in Memphis was visited by her son, and he could not believe what he saw. His mother had a rotting sore on her ankle that had not been attended to in at least a month. Her son demanded that his mother be transferred to a hospital immediately, where a surgeon, after saying he had never seen anything like this, had to amputate her leg just above the knee.

The family of the elderly patient filed a lawsuit against the nursing home – which is when the under-handed methods used by corporations in setting up their businesses were discovered.

Ownership is a Shell Game

Owners of for-profit nursing homes often set up the structures of their corporations in order to distance themselves personally and financially as much as possible. They will often set up separate limited liability corporations that may actually own the nursing home, but they also set up other related business that have a hand in managing the facility, hiring the staff, leasing the real estate and other out-sourced operational needs. These types of practices are called related party transactions, and they can be set up to provide considerable financial benefit to the nursing home owners.

Let's look at some examples.

The two men that were found to be owners of the nursing home in Memphis, among other facilities, lived in Long Island, New York. During the discovery phase of preparing for trial, it was learned that the trust accounts they had set up received $40 million dollars from a revenue of $145 million over the preceding eight-year period. That's about a 28% profit margin. The typical nursing home profit is around 3 to 4%.

The men also engaged in structuring other companies they then used to run their businesses, often paying much more than the acceptable going rate for goods and services. These companies included things like a provider of physical therapy services, property management of the facilities, drugs for their patients and more. The contracts they wrote between their own nursing homes and their related businesses were much costlier than that in a typically competitive market, but it didn't matter – the owners were able to reap huge profits because in actuality they were paying themselves, and skimming the profits off the top.

Another reason that many corporations set up their business this way is to protect themselves from any liability exposure when they're sued for negligence.

In the case of the Memphis facility, it took considerable financial and records investigation just to find out who actually owned the nursing home. When someone sues a nursing home because of mis-managed or negligent care, they'll find that the nursing home itself is usually operating at a loss, and has no money to pay any kind of financial settlement. The Memphis nursing home owned by the two Long island men was operating at a $2 million dollar deficit, and was not even able to buy things like sheets and diapers, or employ an adequate number of staff.

This is a classic case of ‘you can't get blood from a turnip', and it leaves a family high and dry when they can't find out who to even sue for what may have been the wrongful death of a loved one.

Corporate Structure Discovery is Expensive and Can Take Years

Suing a nursing home and its owners can be a very time-consuming process, in most cases taking years to uncover all the layers of subterfuge the corporations have built into place.

And the people involved in corporate ownership of networks of nursing home entities know exactly what they're doing.

In 2012, at a conference of executives in the long-term health care business in Nashville, there was reportedly a presentation on the merits and benefits of structuring corporations with multiple layers. During that presentation, there were materials shared entitled “Pros of Complex Corporate Structure”, with details like “many plaintiff's attorneys will never conduct corporate structure discovery because it's too expensive and time consuming.”

The presenters also covered other advantages of such structuring, noting “financial statements in punitive damages phase shows less income and assets.” That means if the nursing home is involved in a lawsuit, they will appear to have little or no financial assets from which to collect damages or reach a settlement. The further an owner can distance themselves personally from having any ownership role in a nursing home, the less chance there is they'll be found to have any financial liability if they're sued for negligence or wrongful death.

The problem is that even if a personal injury law firm does discover the actual owners of a nursing home, the judge in charge of the case may not allow that information to be shared with a jury. Delving into the masses of legal paperwork to find out who actually owns the entities controlled by a corporation is called ‘piercing the corporate veil', and unfortunately some court jurisdictions just don't understand what that means.

In the case of the elderly Memphis woman, the attorney hired by her surviving family worked for six years putting together his case, and getting two judges to allow detailed information as to who owned the facilities to be heard by the jurors. He and the family also went to trial twice previously, both resulting in a mistrial.

But his efforts were ultimately rewarded. In 2016, a jury came back with a $30 million verdict for negligence, with the two Long Island businessmen who controlled the facility being held liable for $20 million of that total. On one hand, the two men claimed they ‘delegated daily responsibilities for residents to the home's administrators,' while on their tax returns they stated they ‘actively participated in the management' of the nursing home. The defense has filed for an appeal in that case.

Networks of Related Businesses are Perfectly Legal, But…

To be sure, establishing related companies into networks of jointly-owned limited liability corporations is done all the time, quite often by restaurant and other retail chains. There is nothing illegal about the practice, but when it comes to nursing homes, investigations by Kaiser Health News revealed some startling discoveries.

You may likely have a family member or friend living in a local Fort Myers nursing home. In many cases, nursing home residents may not have anyone who ever comes to check on them. With the often understaffed and unsupervised conditions at some facilities, especially if they are not equipped to provide the care they promised, this can be the beginning of the end for the elderly resident.

Always ask questions about your relative's care and any medical conditions or treatment they may have. Check for yourself if the bed sheets have been changed, and if your relative is being fed properly. In the case of a resident who can no longer speak or communicate, this can become a very difficult issue. Don't be afraid to hold the facility's management and staff accountable for the care your family member is receiving.

When you went to look at the nursing home before admitting your mother or father, they may have made all kinds of promises and claims about the level of care they would receive there. But, don't take them at their word – do a thorough investigation of the place, and the corporation that may own it, before you make your decision. (In the case of the Memphis nursing home, staff testified at trial that the facility would hire on more staff when it was learned there was a state inspection scheduled, but that usually their requests for more help fell on deaf ears at the corporate headquarters.)

Our personal injury law firm protects the rights of victims of nursing home abuse, negligence and wrongful death. Our skilled nursing home negligence attorneys know how to identify the owners of a corporate-run senior care facility, and how to hold them accountable if they have caused an injury or death of one of your family members.

It never costs a thing to give us a call, or come in and sit down to talk to us about your concerns. Whether you hire our firm or not, at least you will have answers and information on how filing a personal injury or wrongful death lawsuit works, and you can then decide just what your best plan of action should be.

If you have any questions or concerns regarding the well-being and care of a loved one in a nursing home or senior living facility, call us at 239-461-5508, or just complete this simple form and we'll contact you immediately.

Don't let the underhanded and deceitful business practices of some nursing home operators lead to serious problems of someone you care about.