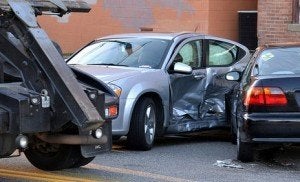 As we've mentioned many times before on this site, no two motor vehicle accidents are ever the same. Even though the circumstances may initially seem similar or even identical from one case to the next, there are always many variables that make one case very different from the next.

One of the most difficult things to accomplish when an injured person decides to take legal action against the driver that hit them is determining exactly who was at fault for the crash. As you may imagine, there are usually two very different sides when it comes to explaining just who was responsible for the crash, and sometimes more. You may have drivers from more than two vehicles if it is a multi-vehicle crash. You may also have one or more eye witnesses who saw what happened, but may each give conflicting versions as to how. You'll also have a police report of the crash, but as we mention in this video, you should never just rely on that. We've seen police reports that are either inaccurate, or completely incorrect.

Back in 1973, Florida enacted a legal doctrine in personal injury lawsuits called pure comparative negligence. The law came about because of the difficulty in determining exactly who should be held accountable, or liable, for causing a car, motorcycle, pedestrian or some other type of accident. Rarely is it cut and dried as to who should be held responsible for your injuries and property damages. Prior to the enactment of the comparative negligence statute in Florida, if a person was found to not be 100% at fault for causing a crash, the person suing them may not be entitled to receive any financial compensation at all. The statute was enacted to make for a more level playing field for all parties involved.

What is Comparative Negligence?

To be successful in a personal injury lawsuit, you need an experienced and skilled attorney to help with establishing clear liability. The insurance company's attorneys and adjusters will do everything they can to deny that their insured driver was at fault – at least at first.

They will ask you to make a recorded statement for the record, and will pressure you to that very quickly following a crash. Here's where having an attorney on your side can prove to be critical. Even though you feel confident that your version of the collision and what caused it are clear in establishing that another person was at fault, you'd be surprised to the scripted questions they ask that are designed to get you to say – or not say – very specific things.

At Goldberg Noone Abraham, our personal injury trial attorneys have had cases in which 100% clear liability is not able to be established. An example would be a jury at trial determining that while another party was 80% responsible for causing the crash, our client was to be held 20% responsible, as well. Perhaps the jury was not convinced the other party was totally liable for the crash, and that our client could have done something to have avoided the collision.

In cases where comparative negligence comes into play, a financial settlement that comes from a jury verdict at trial would be reduced by the corresponding percentage amount of the comparative negligence. If someone is awarded a $50,000 settlement but is found to have been 20% negligent in causing the crash, they would receive 20% less, or $40,000. This can also occur prior to trial, at a mediation ordered by the court in an attempt to settle the case before starting a costly trial.

In cases where clear liability cannot be determined, our skilled personal injury attorneys will often hire the services of a professional accident reconstructionist. These are engineers who uses mathematical and geometrical calculations and equations to reconstruct the physics of the crash, using vehicle speeds retrieved from the “black box” found in nearly all newer vehicles, angle of impact, the distance the cars travelled after the impact, vehicle crush analysis and more. This can be the determining factor in convincing a jury of who should be held liable for the injuries caused by the crash, as opposed to two parties with opposing versions of what happened.

Proving Negligence is Not as Easy as it Appears

In order to win a favorable financial settlement or jury verdict, the attorneys at Goldberg Noone Abraham law firm use our considerable resources and past experiences to build a solid case on your behalf. We utilize every available method to make our case that the other party was negligent, including hiring the appropriate experts to give their opinions on just how the crash occurred.

At first, it may appear that you will be able to get money from the at-fault party's insurance company following a crash. They want to get you to go away, and fast, so you may be tempted to accept a quick check and put the situation behind you.

But in many cases, people hire our law firm because they've discovered they are not being treated fairly by the other party's insurance company, or they are unwilling to admit to liability on the part of their insured driver. When a personal injury attorney begins speaking as your representative, the insurance company will begin to act and negotiate differently. They understand we mean business, and have been doing this for nearly 20 years. When you hire our firm, your problems instantly become our problems. You are free to continue to seek medical treatment for your injuries, and we'll handle the rest.

If you've been hurt in a crash, it never costs a thing to call or meet with us to get answers to your questions. You may not even need a personal injury lawyer to handle your case. But you only get one shot at settling your claim, so you'll want to make sure to give it your absolute best shot to increase your likelihood of obtaining a fair and reasonable financial settlement.