It’s About Time: Texting While Driving Should Become a Primary Offense

It’s About Time: Texting While Driving Should Become a Primary Offense 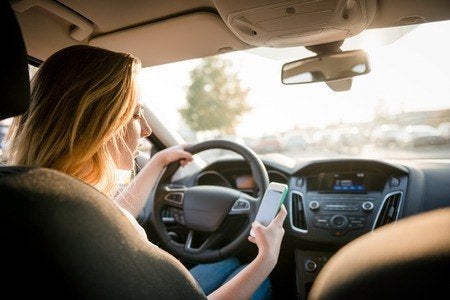 On Wednesday, the Florida Senate's Transportation Committee is scheduled to review the newly-proposed SB-90, which would make texting while driving a primary offense, as opposed to a secondary offense as it is now. That means that law enforcement could pull you over for suspicion of texting while behind the wheel, instead of pulling you over for a different infraction first.

“It's so ironic that with all the distracted-driver crashes we have in Lee County and throughout Florida, we're only one of seven states in the country where it's still a secondary offense”, says Fort Myers personal injury attorney Scot D. Goldberg. “We have more than one case currently where a driver is considered to have been using their cellphone while driving, and caused a crash that has seriously injured our client – it's beyond time to give police more ammunition in fighting this negligent action.”

The numbers are hard to believe – unless you happen to represent people who have been victimized by it – but there were just under 50,000 crashes in Florida during 2016 that involved distracted drivers. That means that every single hour in Florida, more than 5 crashes are caused by some form of driver distraction. That resulted in over 3,500 serious bodily injuries, and 233 traffic fatalities. Since 2013, distracted driving crashes have increased by 26%.

People Know It's Dangerous – and They Do It Anyway

Statistics also show that people interviewed on the topic say that they understand that texting while driving is a real danger on the road. But unfortunately, those same people also admit to doing it. “This is a classic case of people knowing what they're doing is wrong, but thinking they're immune from any adverse effect caused by their actions”, says Goldberg.

People mistakenly think that if they look at their phone quickly enough, nothing bad will happen. ‘Oh, it's just this one message, and it's really important' is often the beginning to a very bad story. So many times, we've been involved in cases where catastrophic physical injuries have resulted from a texting driver crashing into another car or motorcycle. The at-fault driver was often quoted as saying they just took their eyes off the road for a second – but yet that's all it takes to take your focus off your driving.

As we mentioned, sending or responding to a text message on your cellphone is just one of several ways a driver can become distracted. Eating while driving, applying makeup, reaching down for something you dropped or turning to interact with someone else in your car – all of these things can result in a tragic distracted driver crash.

“Driving should 100% about driving and nothing else”, Goldberg says. “There is no text that important or no cheeseburger that enticing to take your attention away from the road and the traffic around you.”

Goldberg Noone Abraham, is completely in support of Senate Bill 90, and hopes the Committees within the legislature does the right thing and votes it into law. For more details and the exact language in the bill, click here.