Southwest Floridians May Not Get Presents on Time 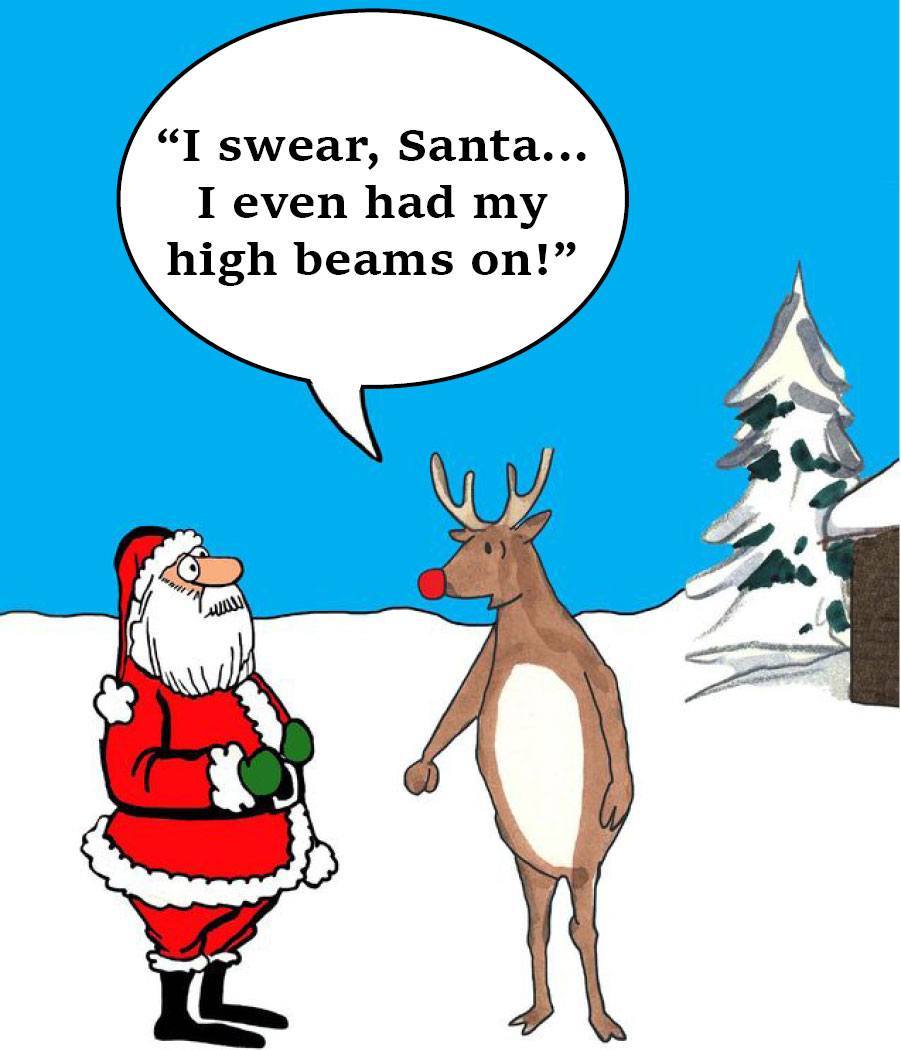 According to the PHP, (Polar Highway Patrol), a collision involving a red sleigh, several reindeer and a Buick driven by a Canadian tourist shut down all traffic lanes of US 41 earlier today.

Initial reports indicate that even though the sleigh was well illuminated by a bright red light at the front, law enforcement stated that it appears the Buick made an illegal left-hand turn into the right-of-way of the sleigh. The accident took place in front of a bingo hall that was featuring an early-bird dinner special.

“The sleigh was packed full of hundreds of wrapped Christmas presents, which ended up scattered all over the roadway”, said the investigating officer.

Fortunately, no one was injured in the crash. The driver of the sleigh, S. Claus, was transported to a local hospital for observation. He was quickly discharged when it was discovered that he had been eating all the cookies and milk in the hospital cafeteria.

There were 8 deer involved in the collision, all of which escaped without injury. They were last seen grazing on the grounds at the Shell Factory. The woman driving the Buick, identified as part-time Fort Myers resident I.M. Careless, was treated for confusion at the scene and released.

“Unfortunately, this is a classic example of how a crash can happen to anyone, at any time and at any place,” said Fort Myers personal injury attorney Mike Noone, of the law firm of Goldberg Noone Abraham. “Mr. Claus reached out to the firm after the crash, and our sleigh and reindeer accident team are thoroughly investigating the circumstances of the crash.”

Attorney Noone goes on to point out that in this case, as in most traffic crash cases, dealing with both drivers' insurance companies can be the most difficult hurdle in receiving fair financial compensation for your injuries, continued treatment and rehabilitation, and any long-term physical impairments. “Ms. Careless' insurance company is now questioning whether the bright red light designed to guide Mr. Claus's sleigh was in fact operational, and whether a reasonable person could or should be expected to have seen it prior to turning into his right-of-way,” Noone points out.

“Thank goodness no one was seriously hurt in this crash, and Mr. Claus isn't out for a multi-million-dollar settlement,” Noone adds. “He just wants us to help him make sure he is fairly compensated for his losses, and he and his eight furry friends make it back home and begin to make their lives whole again”.

Mr. Claus told local news outlets that his attorneys at Goldberg Noone Abraham were trying to find a suitable sleigh repair shop and obtain a rental sleigh through his insurance company. He is reportedly staying with some elf friends at the Lani Kai on Fort Myers Beach.

Attorney Noone says, “Our firm will continue to fight for Mr. Claus' legal rights to ensure that there was indeed a Merry Christmas for all, and for all a good night.”

Legal Disclaimer: The above information is not intended as legal advice, and does not constitute a legal relationship. The hiring of a sleigh and reindeer accident attorney should not be based solely on advertising. Please slow down and drive safely this Holiday Season.