Doggone Driving: Florida Laws About Driving with Your Pet in the Car 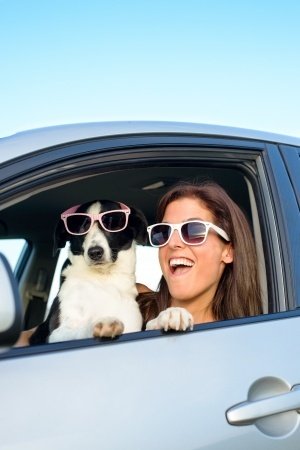 Recently, one of our employees here at Goldberg Noone Abraham law firm had a bit of a scare while on the road. When taking her cat to a veterinary appointment, she was involved in a motor vehicle accident. While she did have her cat in a carrying case and strapped in with the seatbelt, the force of the impact caused the cat to be tossed to the floorboards of the car. And it was not a very violent impact, either.

Luckily, they were both able to make it to the veterinarian. After dealing with the collision, the cat thankfully checked out A-OK. But, it got us thinking about the large numbers of folks we see on the road who are driving with a pet in their vehicle.

We post often about the dangers of distracted driving, and most of that topic centers around things like using a cell phone or eating while behind the wheel. But there are other things, some of them four-legged and furry, that can end up distracting us from keeping our mind and eyes on the road.

There a lot of people who travel with pets in the car, for a variety of reasons. During the recent mandatory evacuations brought on by Hurricane Irma, thousands of Floridians were forced into transporting their fur babies with them, many whom have never had experience in travelling, especially long distances, with their pets. Some people simply take their dogs everywhere, while others only transport their cat or dog to the vet's office or the grooming salon. We've all seen people driving with their dog on their lap, usually while the dog sticks it's nose out the window in the breeze.

Not only is this unsafe for the people in the car, but it can end up causing severe injury to your pet, too.

Imagine an unrestrained pet – cat or dog – and what can happen to it if you're involved in a serious collision. Say you're travelling at 30 miles per hour with a 10-pound dog in your car. If you crash, that dog can hit you, the windshield or another part of the car with 300 pounds of force. The larger the animal, the more the force. A large dog weighing over 60 pounds can exert more than 2,000 pounds of force, which is enough to crush your skull.

If Florida, there are currently no laws on the books regarding people driving with a pet in the car. It is not illegal to drive with an unrestrained animal in the bed of a pickup truck, either*. (There was an effort to enact a bill that would have addressed the legalities of those actions back in 2015, but it was withdrawn before it ever made it onto the House floor). While there are laws currently in place to regulate the use of cell phones, (texting while driving) and other distractions, they don't say a thing about being distracted by a pet in the vehicle. If law enforcement does issue a citation related a crash being caused by a distracting pet in the car, it will likely be lumped under the category of “other distraction inside the vehicle.”

Even if you're not involved in a crash, the sudden action of braking hard or swerving to avoid another car can toss your unrestrained dog or cat around the car's interior like a chew toy, which could severely injure or even kill it.

AAA conducted a research survey about people's habits when they have an animal in the car. Here's a few of the key findings:

And here are the most alarming stats:

The AAA survey, which was conducted together with a company called Kurgo that manufactures a variety of animal restraint devices, also showed that people carry their pet on their lap ‘because it's a small, calm dog.' But just because your dog is calm does not make it less of a potentially hazardous projectile if you are involved in a serious crash.

If you ever find yourself in need of an auto accident attorney – no matter what may have caused the crash – we're always here to help. We deal with the hassles your insurance company – or that of the other driver – will throw in your way. All the major insurance carriers out there, and their armies of attorneys, are familiar with our law firm, and that we're not afraid of taking a case all the way to trial. In most cases, we can negotiate a favorable financial settlement on your behalf to help pay for your medical costs related to your crash injuries before going to a jury trial. But if not, we'll fight like a pit bull to get you the monies you deserve under the law.

It also may be that you do not need an attorney after your crash, and we'll never mislead you about that. We will answer any of your questions, at no cost to you, with one simple phone call to 239-461-5508. Or, you can complete this simple form and one of our skilled attorneys will contact you immediately.

We encourage every driver on the road to do all they can to limit distractions while behind the wheel, and to research and buy the appropriate pet restraint system to best fit the needs of keeping your pet safe while in the car.

Information about Kurgo and their pet restraint products can be found here.

AAA publishes a lot of valuable information about travelling with pets in your car, and you can find it here.

*In Miami-Dade County, an animal in the bed of a pickup truck must be humanely restrained or inside a carrier that's secured to the bed of the truck