Can You Sue A Bar For Making You Drunk?

As With Most Legal Questions – That Depends… 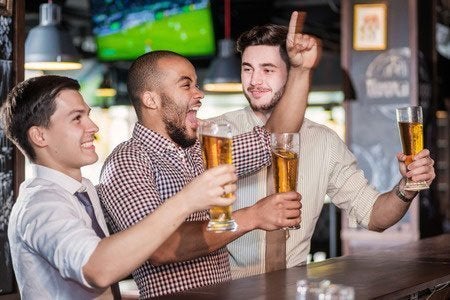 If you're drinking in a bar and are overserved, and wind up causing a serious crash, should the bar be held responsible? This is a question that does come up quite often in the fields of law we practice, specifically when a serious injury from a car or motorcycle accident is involved.

As personal injury lawyers in Southwest Florida, we help people who have been victimized by the actions, – generally careless or negligent actions – of someone else. The drunk driver who slams into your car after he was served too much alcohol, assuming he or she survives the crash, will likely retain the services of an attorney. One of the first things to be researched and investigated by that attorney is whether their client was knowingly served too much alcohol at one or more specific business establishments. The problem is, there is much more to answering that question than you may think.

About a year ago, a New Jersey man hopped on his motorcycle and went out to a couple of bars. After some heavy alcohol consumption, noted by the two establishments where the man was known to have been drinking, he tried to ride to a friend's house at around 3:00 am. He would up crashing his bike, which resulted in a severe leg injury – he did not hit or injure anyone else.

Now, he and his attorney are attempting to sue the two bars, claiming they clearly should have been aware the man was highly intoxicated, and either should have not served him, or should have done more to keep the guy from leaving the last bar on his bike. According to the local media coverage, the biker was not given a sobriety test for almost five hours after the crash, and his blood alcohol content was then below the limit of DUI, (0.8%, just like in Florida). This was after the officers investigating the crash first charged him DUI – those criminal charges were later dropped.

Now, the man and his attorney are attempting to use the man's receipts from the two bars he was in, along with the testimony of the persons who either saw or served the man, to prove he was so drunk that the business establishments are responsible for causing his injuries.

What is ‘Dram Shop Law', and How Does it Work in Florida?

Back in the good ol' days, liquor was served in a unit known as a dram, before the more commonly used ounce measurement came into effect. This resulted in what are known as ‘dram shop' laws, or laws regulating a place that served alcohol to the public. These laws vary in every state, (New Jersey and Florida dram shop laws are different, for example), and that is the basis for someone suing a drinking establishment for getting too drunk and causing a serious crash, even if the only person injured was the alleged drunk driver.

In Florida, Statute 768.125 is the related dram shop law in effect, and it contains several important aspects that allow for going after a bar, restaurant or their employees for overserving a guest. Generally in Florida, proving negligence of a business under current law can be a very difficult. But, there are two critical elements of FS 768.125 that may serve as notable exceptions:

1). Not Being of Legal Drinking Age – If the driver that is alleging they were overserved by a bar or restaurant is under Florida's legal drinking age of 21, that can easily be proven. In cases like those, the mere admission that an underage patron was served any alcoholic beverages at all, much less too much, will also come under legal scrutiny.

2). A Known History of Alcohol Addiction – This one is far more difficult to prove. FS 768.125 states someone who “knowingly serves a person habitually addicted to the use of any or all alcoholic beverages” may be considered legally liable for any subsequent motor vehicle crashes.

As you might imagine, proving that second exception can be extremely difficult. It's likely that nearly everyone has been to a bar or other establishment that serves alcohol and seen what is referred to as “a regular”, a customer who seemingly spends a lot of time there*. This fact, in and of itself, is not sufficient to establish a ‘known habitual addiction to alcohol'. However, if a patron – a regular or not – has a conversation with another person at the bar about how he or she just completed an alcohol treatment program or has a history of DUI arrests, that information can be very damaging for the bar and it's management, their parent company and their insurance carriers.

Florida Alcohol Laws, Like Most ALL Laws: “It Depends…”

As is the case in almost every aspect of the law, there are a lot of variables that come into play when someone is attempting to bring a lawsuit for financial damages against another party or parties. Very few things are ever black and white, and a skilled personal injury attorney will know every aspect of what can and can't be legally implemented in conjunction with filing a lawsuit.

To the vast majority of questions potential clients have when they first reach out to us after being injured in a crash caused by the carelessness or negligence of someone else, we find ourselves saying “it depends” a lot in the early stages.  But that's why we're here – to answer ANY questions you might have about ANY legal problems you may be involved in.

It never costs a penny to get the answers you're looking for. And when you do retain our personal injury law firm for your accident case, you'll never pay a penny out of your pocket during the course of your case – we do all of our work on a contingency basis, which means we earn our fees only after we are successful on your behalf.

No two personal injury and wrongful death cases are ever the same. That's where the experience and skills of the attorneys and staff at the Goldberg Noone Abraham law firm will prove to be invaluable in helping to get the financial compensation you're entitled to under Florida law.

You can reach one of our attorneys immediately at 239-461-5508, or just complete this simple form and we'll contact you right away.