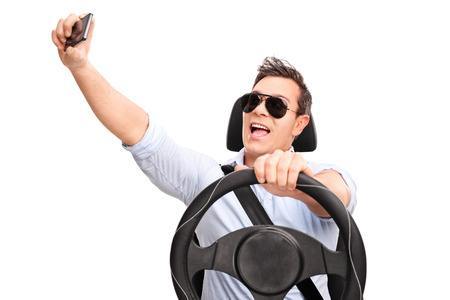 As if a serious motor vehicle crash caused by a distracted driver isn't bad enough, bad driving also will ultimately result in all of us paying more for car insurance.

Even though newer cars are safer than ever, insurance industry representatives say that so-called ‘smart phones' are leading to an increase in serious car, truck and motorcycle accidents throughout the country. In 2016, the National Highway Traffic Safety Administration reported there were 40,200 traffic fatalities which is a 14% increase over 2014.

“More crashes mean more costs for insurance companies,” says personal injury attorney Scot D. Goldberg, of the Goldberg Noone Abraham Law Firm. “Distracted drivers are causing a lot more crashes these days, and you can expect that the insurance companies won't absorb those costs, so you can count on your rates going up anywhere from about 3% to 10%.”

There's not a day that goes by that we all don't see someone making stupid driving decisions. And although cell phones are the newest cause of the problem, you can't forget about the person trying to eat their lunch while driving, putting on makeup, or looking for that CD that fell down between the seats. The type of distraction doesn't really matter – it's just that now, cell phones have made it a more prevalent problem.

The NHTSA also reports that 10% of drivers between the ages of 15 and 19 who were involved in a fatal crash were distracted at the time. It should come as no real surprise that younger drivers – those between 16 and 24 – are found to be more prone to using some sort of electronic device while behind the wheel. Law enforcement officials in Florida report a higher incidence of infractions within that age group, a trend that is nationwide. (You can read the full NHTSA report here).

In fairness, rising insurance costs are not the result of increased distracted driving crashes alone. Newer cars are designed with more technology, which is more expensive to repair or replace. In the ‘old days', a parking lot accident may result in a bumper or fender repair. Today, there may be an electronic back-up camera involved, or some other type of technology that greatly increases the costs to get your car repaired.

Goldberg Noone Abraham partner Mike Noone spent years as a senior insurance claims analyst prior to becoming a personal injury lawyer. His expertise regarding the insurance industry can prove to be invaluable in the event you're involved in an injury-causing car crash. “In actuality, insurance rates are rising at alarming rates – anything that causes the insurance companies to spend more, they're going to pass those costs along to their customers.”

Noone also points out that there are other factors that lead to increased insurance premiums, like rising medical costs, and yes, the costs involved in accident lawsuits. “Surely, ‘frivolous' lawsuits do add to increased insurance costs,” says Noone. “But in the vast majority of the car crash cases we represent, insurance companies are extremely reluctant to pay a reasonable settlement amount to compensate our clients for their injuries.” Noone says there is nothing frivolous about someone with a serious injury that will adversely impact the rest of their lives expecting to be fairly compensated under the law, especially after faithfully paying their premiums for years.

If everyone made a more concerted effort to just put the phone down while they're driving, it would go a long way to reduce the number of serious crashes on Southwest Florida roads. It's aggravating when you see someone talking on the phone or texting in the car next to you. The carnage on our local roads is an indicator of just how common this is, and increased insurance premiums are just one of the many downsides resulting from this poor driving decision.

Scot Goldberg and the personal injury trial attorneys at Goldberg Noone Abraham, deal with insurance companies every day, aggressively representing the rights of accident victims. These people have suffered serious physical injuries, through no fault of their own. “We're alarmed that the number of traffic fatalities in Lee County hit a record 109 last year,” Goldberg says. “That number is only going to continue to go up if people refuse to put down the phone and just focus on their driving”.

Goldberg Noone Abraham, is a personal injury law firm with offices in Fort Myers and Punta Gorda. There is never a charge to call or schedule a meeting to discuss the circumstances if you've been involved in a serious car, motorcycle or truck accident, and you pay us no fees unless we are successful on your behalf. You can always speak to a personal injury attorney, anytime day or night, by calling 239-461-5508.