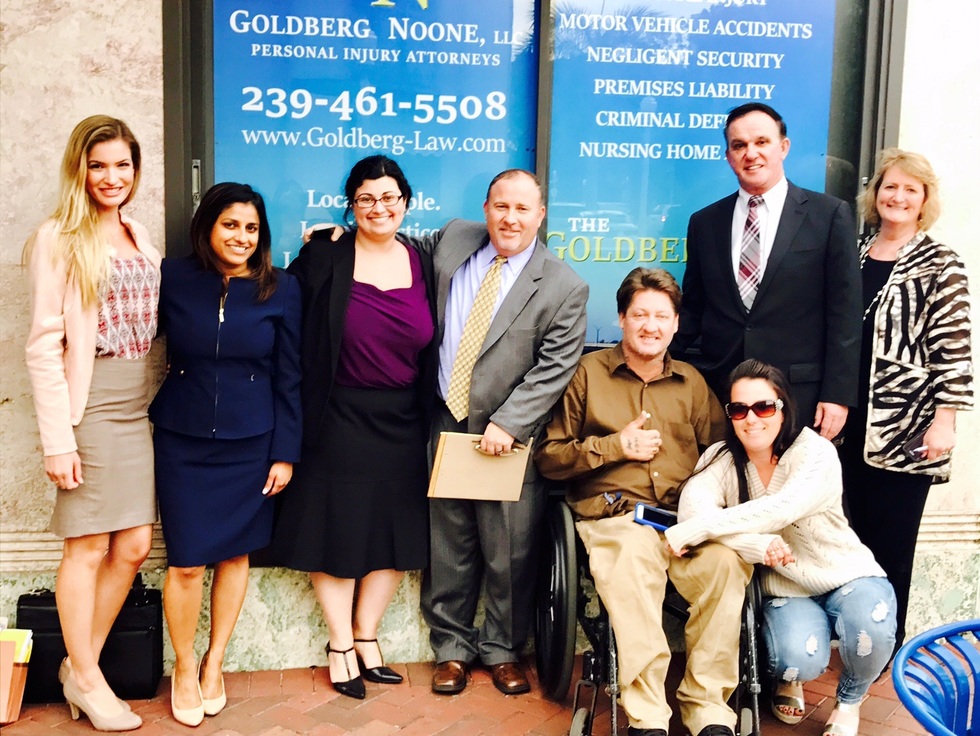 The evening of November 15th, 2012, is a night that Steven Simpkins will never forget. This is the night he found out that his 19-year old son, Joseph, was tragically killed in a fiery motorcycle crash on Bayshore Road and Euclid Avenue in North Fort Myers, Florida.

The young Mr. Simpkins had planned a group ride with other motorcyclists that night, all enjoying the love for motorcycles they shared. There were four bikes and six people who headed out that night, but sadly, only five people made it home alive. Simpkins, just blocks from his destination, was killed when a car that was attempting to make a left-hand turn onto Euclid Avenue suddenly pulled into his right of way.

Attorney Michael Noone, of the law firm of Goldberg Noone Abraham, was retained by the Simpkins father and served as the lead attorney. Over the course of several years, Noone and the entire team of personal injury trial attorneys worked tirelessly to discover the facts of the case, and to mount an effective strategy for presenting those facts to a jury in a trial. On Friday, March 10th, 2017, the week-long trial culminated in a successful verdict on behalf of Mr. Steven Simpkins, Joseph's father and representative of his estate.

“This case was extremely challenging, and presented a lot of unique circumstances,” says Noone. “Every single motor vehicle crash brings with it very different factors that need to be aggressively and thoroughly investigated in order to determine fault and whether there was negligence on the part of any of the parties involved.”  A lot of people don't understand that preparing to represent a client in a wrongful death case like this one can take years of focused effort and perseverance. This specific case took about four and a half years from the night it happened until the jury presented its verdict last week. At the end of the trial, the jury deliberated for about 3 hours, ultimately delivering a verdict of $3.3 million dollars to the estate of the deceased Mr. Simpkins. Because the jury also found that Mr. Simpkins was partially at fault, the final amount of the verdict will be reduced by 40%.

What Happens in Wrongful Death Trial

In this specific accident case, the Estate of Joseph Simpkins filed a lawsuit against the driver and owner of the car that pulled into the path of the motorcycle he was riding that night. And just as in all of the cases we work on at Goldberg Noone Abraham, the attorneys went to work immediately, always assuming that the case would end up in front of a jury. Frankly, a lot of personal injury cases do not end up going to court, because the insurance company for the other side will often offer a financial settlement at the very last minute. This is because presenting a case in court can be very expensive, and the attorneys at the insurance company understand that.

“We prepare for every single case as if we expect to go to trial,” says Noone. “You cannot assume anything in these types of lawsuits, so we leave no stone unturned as we put the facts of the case together, and we never deviate from the ultimate end result, which is going to trial.”

Our firm spent years contacting eye witnesses to the crash, conducting many depositions to gain insight into the facts of the case. A deposition is a form of sworn testimony in which a person is placed under oath to tell the truth regarding what he or she knows about the case. The resulting testimony may then be used within a trial and presented to a jury. Mike Noone points out that a jury trial is never as simple and straight-forward as people see on a television courtroom drama. “Both sides in a trial present the facts, and the jury's job is to decide who, if anyone, should be held accountable for the crash and resulting injuries, or in this case, the sudden death of a young man. They also need to determine to what extent the surviving family has suffered, and affix a financial amount commensurate with what they feel is appropriate.”

In the case of young Mr. Simpkins, we presented testimony from the Florida Highway Patrol officer who was in charge of investigating the crash back in November of 2012. As part of an accident involving a fatality, FHP protocol requires the investigating officer to determine what really happened to cause the fatal crash, and they produce diagrams and mathematical measurements to support their results.  Meanwhile, the defense spent tens of thousands of dollars on an accident reconstructionist to put together alternative theories on how this accident might have happened.  That $60,000 expert opinion involved dozens of technical diagrams and mathematical equations regarding vehicle trajectory and rotation to try and come up with a speed that the defense attorneys liked.

In this particular case, after hearing all of the evidence, the jury came back with a significant damages verdict in favor of the Estate of Joseph Simpkins to compensate for the wrongful death of a bright young man and for the pain and suffering endured by his father.

How Can You Put a Value on the Loss of a Loved One?

In Florida, the laws are written in a way that permits the person who has suffered the wrongful death of a family member to receive financial compensation for their loss. In cases like this one, there was total agreement by both sides in the courtroom that Mr. Simpkins' death was a tragic loss. All parties involved agreed that at 19 years old, Mr. Simpkins had a full and promising life ahead of him, and to have it come to such a sudden, horrifying end was truly devastating.

The law also allows for a measurement of how to compensate someone who has suffered a tragic loss, and that measurement is money. Everyone involved in this trial fully understood that there is no amount of money that can bring back young Mr. Simpkins.  All the parties agreed that no amount of money will allow Mr. Simpkins and his son to continue the experiences they had shared over his lifetime, like camping, fishing and building motorcycles together. But Florida law does allow a jury to assign responsibility for a wrongful death and award financial compensation to the surviving family members who have suffered as a result of the devastating loss.  This is what our law firm fights for on behalf of our clients.

A lot of folks have been summoned for jury duty, but few have actually been selected to serve on a jury in a trial involving a life-altering motor vehicle crash. “In most of the cases we are involved in, the jury members will be charged with using their common sense,” says Attorney Noone. “As both sides present their facts regarding the case, the jury needs to use their common sense to ascertain which party's version makes more sense to them, or is more logical. That's really the bottom line.”

The personal injury attorneys at Goldberg Noone Abraham, are proud of the work we do every day, helping our clients after they've experienced a serious loss. As we mentioned, no two cases are ever the same, and there are no guarantees of success when two parties are involved in a lawsuit. Our law firm is always available to speak with you at no cost whatsoever, to provide the answers you are going to have after being involved in a crash. If you do hire our law firm, you'll never pay us a penny unless we are successful on your behalf. All it takes is one phone call to begin the road to justice.

If you ever find yourself in this terrible situation, don't wait or assume that the insurance company will do the right thing. Reach out to our law firm for help, and get the answers you deserve for all of your questions.