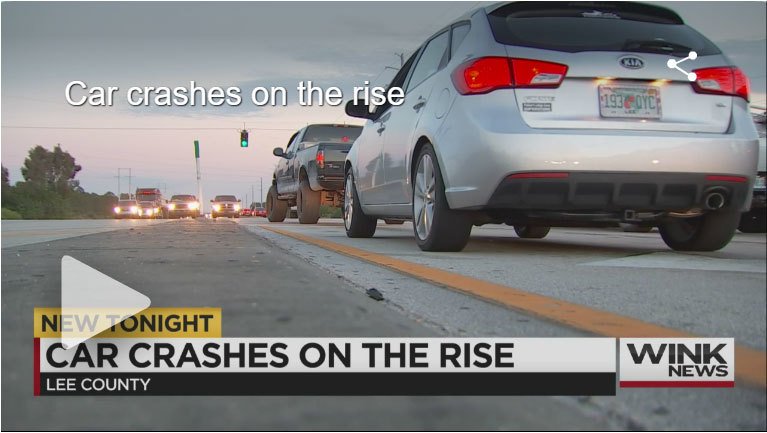 It doesn't take a genius to figure out why so many people are dying on our area roads. A recent local television story on the drastic increase in the number of Lee County traffic fatalities rising from 85 at this time last year to 99 as of now quotes drivers saying “it's scary, there are a lot of crazy drivers out there”, and “people drive to fast”.

Statistics, if you're into that kind of thing, point out the same: 94% of the nation's crashes are caused by some sort of driver error. As quoted in a report by the National Highway Transportation Safety Administration's National Center for Statistics and Analysis, which researched the ‘critical reasons' behind their study of 5,470 motor vehicle accidents, “the critical reason, which is the last event in the crash causal chain, was assigned to the driver in 94 percent (±2.2%)† of the crashes”.

Here are some other stats that illustrate just why so many people are dying on Southwest Florida roads, and across the country:

Just a quick glance at these numbers clearly shows exactly what is causing so many people to lose their lives while behind the wheel.

We understand that there are circumstances in which anyone can find themselves in a potentially dangerous situation on the road. We drive here every day, and each of us sees daily reminders of just how dangerous it can be out there.

Our perspective is one of sharing information about the dangers of things like distracted driving, texting while behind the wheel, speeding and aggressive driving in the hope that the more we hear about it, the more we'll all apply safer driving habits in our daily lives.

If you saw the devastating results of what happens in a serious car crash as much as we have in our personal injury law practice, you'd have a clearer understanding of the real costs of bad driving. Broken or severed limbs, severe traumatic brain injuries, and in the worst cases, the death of someone's mother or father, child or sibling – and a lot more tragedy than any family should have to endure. The effect these types of accidents have on local families is nearly unimaginable, and we see it far too often.

If there were fewer accidents on Lee County's roadways, we would not be as busy as we are. And that's fine with us. We've also written about what effect driverless or autonomous cars will have on the future of motor vehicle crashes here. There are those that predict the number of crashes and traffic fatalities will drop, and those that feel they will have little to no effect. At this point no one really knows the answer to that question.

The bottom line is we all should make extra time for getting from one place to another, and thinks hard about what we do when we slide behind the wheel. Saving lives takes the focused efforts of everyone who shares the road. Developing safer driving habits doesn't cost a thing, and the more people that do it, the more the results will follow – fewer traffic fatalities and serious injury crashes.

The Florida Highway Patrol Trooper in the television news story, Lt. Greg Bueno, (you can view it here), had some excellent points about ‘taking ownership of the responsibility and accountability of driving', and the story also points out that our roads are currently getting even busier with the arrival of our winter season, and that the leading factors in the rising number of fatal crashes locally are speed and distracted driving.

So, the answer to why there are so many bad crashes on Lee County roads is actually pretty easy to answer. If each of us made a more concerted effort to just slow down a little and keep our focus on our driving, more lives would be spared.