Lunacy on Our Roads Not Just One Night per Year 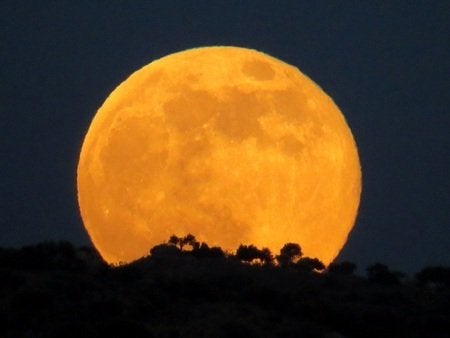 There are a lot of people who believe in the effect that a full moon can apparently have over someone's behavior, a phenomenon known as the lunar effect. Believers feel that the people go through some sort of biological changes when the moon enters its fullest phase, with tonight, (Novermber 14th, 2016), being called a ‘supermoon‘.

Supermoons occur when the moon passes the earth at its closest point, or its perigee, as it orbits the earth. The moon, especially as it rises, will appear about 15% brighter and 7% larger than normal.

But while it may be easy to call someone a lunatic when you see them pull a stupid move while driving, it may not be accurate. The words ‘lunatic' and ‘lunacy' come from the origins of the Latin word ‘lunar', or having to do with the moon. Legend has it that crazed werewolve's came out during a full moon, and people associated the deadly behaviors of werewolves with the physical and biological changes that supposedly take effect during a full moon.

According to scienceline.org, there have been studies to determine the exact, specific correlations between the moon's full lunar phase and things like crime, violence and even car crashes. According to their website:

So it appears that in reality, there is very little scientific evidence to support that theory. As logical as it may seem, we really can't blame the supermoon for the idiotic drivers on Lee County roads. Around Southwest Florida, bad driving is just plain old bad driving.

There has been a lot written about whether an accident is really an accident at all, or just a case of someone making a wrong reaction, resulting in a motor vehicle collision. There is a very good organization in Southwest Florida called Stay Alive Just Drive, (www.sajd.org), that promotes and educates people about the dangers of unsafe driving. Their Executive Director, Jay Anderson, points out some pretty interesting facts when it comes to car and motorcycle accidents:

There are three safety errors distracted drivers routinely find themselves guilty of:

If you just stop to think about the 3 scenarios described above, reducing the number of serious car and motorcycle crashes on our roads seems pretty simple – just don't do those 3 things. If everyone focused on just those 3 seemingly obvious factors when behind the wheel, serious injury and fatality crashes would decline.

But as we all see every day, people drive like morons. Aggressive driving, road rage, unsafe vehicles and just plain old stupid driving habits seem to be the norm around here. A trip to the grocery store can be a life-threatening experience, because you really never know when some crazed lunatic will blow through a stop sign and t-bone your car.

Goldberg Noone Abraham, is a local Southwest Florida personal injury law firm whose attorneys help those who have been victimized by the careless or negligence of someone else. Through no fault of their own, their lives have been devastated because of some other driver's bad driving decisions, or distracted driving.

We may not be able to blame the supermoon on the number of bad car and bike crashes around here, but we can all do better to remain focused on only our driving when we're behind the wheel.

To learn answers to your questions about being in a serious crash, please click here.