Walk of Shame: Why Did The Pedestrian Cross the Road? 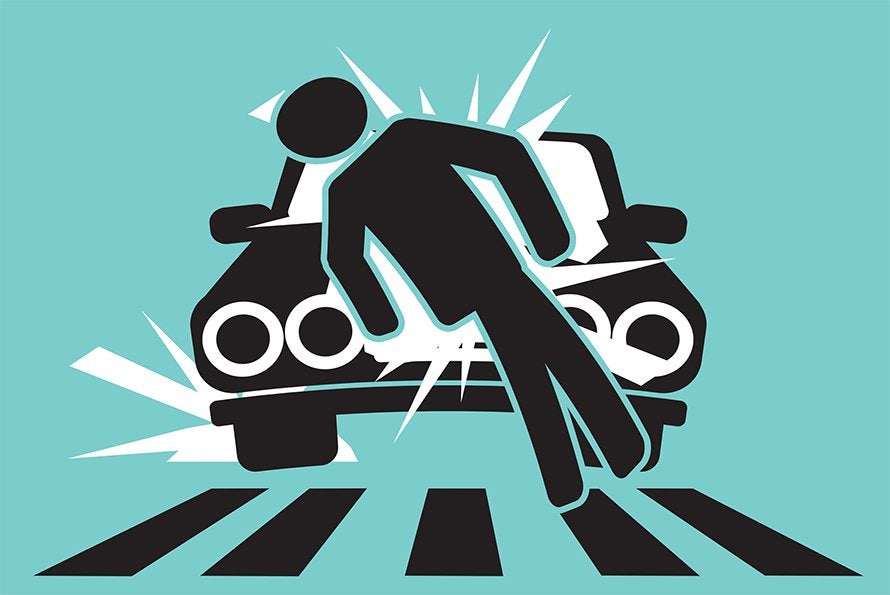 Car vs Pedestrian Accidents Can Be the Most Deadly

It happened just this morning, while driving in to the office. On U.S. Highway 41, or Cleveland Avenue in Fort Myers, a couple was standing in the center median, waiting to walk across the street. They had just gotten off the bus, which stops in the middle of the block, not near a stoplight or the crosswalks.

Standing there, watching for cars coming at them in both directions, they were without the benefit of any kind of barrier or concrete curbing – just two people, standing in the middle of rush hour traffic on one of the busiest streets in all of Southwest Florida. With the bright morning sun so low in the sky, and the aggressive driving seen on every morning commute, this looked to me like a recipe for disaster.

I was reminded of a game of pinball, where a ball is bounced violently because of being hit by a moving object. These two people were trying to cross the road without the benefit of using a crosswalk, or waiting for a traffic signal to allow them to cross safely.

In 2012, the National Highway Traffic Safety Association reported that 4,743 pedestrians died in traffic crashes, a 6-percent increase over 2011. But here's the really shocking stat: a whopping 70-percent of fatal pedestrian accidents occurred at a non-intersection, meaning where there was no crosswalk. The report also points out the Florida ranked number three when it comes to pedestrian traffic fatalities. When I recall the couple standing in the middle of U.S. 41 like a couple of potential pinballs, I can understand why.

Car vs Pedestrian – Who is At Fault?

In Florida, there are laws stating that in most cases, a pedestrian has the right-of-way when crossing the street in a marked crosswalk, in accordance with the traffic signals at that intersection. But that doesn't mean that if a pedestrian is hit by a car while crossing OUTSIDE a crosswalk, the driver may not be either totally or partially at fault.

As Fort Myers personal injury attorneys, we deal with pedestrian accidents a lot. It's never pretty when a car hits a pedestrian, and there are so many questions involved in determining who may be at fault, and who will pay for any serious injuries you may have suffered. Was the driver speeding, or in some way impaired? Were the vehicle's headlights functioning properly? Did the driver zip out from behind another car, or from where they would have been unable to see someone attempting to cross the road? It takes a lot of intense investigation and considerable legal skill to determine who is actually at fault in a pedestrian versus car accident. That's what we do.

Even if a pedestrian does attempt to cross in a crosswalk and in accordance with the traffic signals at the intersection, a car can still come out of nowhere and hit the person. Divers and pedestrians are often confused about who has the right of way. In fact, I saw this exact scenario about two weeks ago, also on U.S. 41 coming in to the office. While stopped at the light at Crystal Drive, I watched a young man (try) to make it across the highway, walking from the west side to the east, heading toward the Walgreens on the corner. As he was about to successfully make it to the apparent safety of the center median, a woman came out from Crystal Drive to make a left turn and head south on 41. She was clearly going over the speed limit, trying to make the green turn light and get to work on time. The left mirror on her car caught the pedestrian on his left hip, arm and backpack, knocking it off his shoulder onto the ground. I think the backpack was the thing that saved it from being much worse, because it took most of the impact.

The pedestrian was not knocked down, and thankfully appeared to suffer no serious injury. The female driver, flustered and impatient, did come to a stop on 41 after she clipped the guy, rolled down her window and yelled, “I'm really sorry!” before driving away. The poor pedestrian, as you can probably imagine, had this really bewildered look on his face, and raised both arms, and one specific finger, in her direction. I looked around at the other drivers next to me at the red light, and we were all just shaking their heads in disbelief.

The roads around Southwest Florida are busy, whether in season or during the summer. The odds are against pedestrians, for sure. We see close calls almost every day in downtown Fort Myers, and frankly it's amazing there aren't more cars versus pedestrian crashes.

The age group with the highest number of pedestrians hit by a vehicle nationwide is between 21 and 24 years-of-age. I am guessing that was about the ages of the couple I saw this morning, standing in the middle of U.S. 41. I can only hope they made it safely to the other side.

At Goldberg, Racila, D'Alessandro & Noone, we help people who have suffered a serious injury through no fault of their own. If you need legal help after any type of motor vehicle accident, or even if you just need some answers, we're always ready to help. Just give us a call, or complete this simple form.