I Took a Video of Some Cops – Why Am I in Trouble?

Cameras, Cops and You

There has been a lot in the news media lately about the legalities and ramifications of videotaping police activity, under a lot of different scenarios, from the outrageous racial troubles in Ferguson, MO, to the case of a California cop who allegedly pummeled the tar out of an unarmed black woman. So much is caught on camera now, with everyone turning into an instant filmmaker on their smartphones — but what exactly are your rights when videotaping the police? 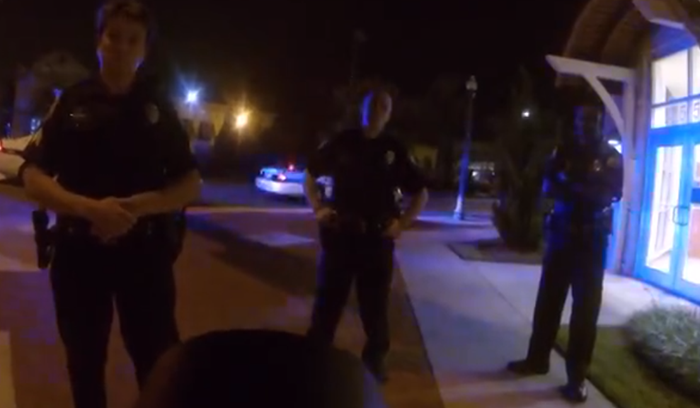 As criminal defense attorneys in Southwest Florida, people ask us all the time what their legal rights are when it comes to recording any type of interaction with law enforcement officers. Almost all cop cars these days have pretty sophisticated dash cam systems to capture every moment of a traffic stop. They are there to protect their side of the story, should anything not go as planned. Now more than ever, people are taking it upon themselves to make their own recording, and this is where the rules of law come into play.

Are you within your legal rights to videotape the police? The answers are both yes and no. And, you really have to think about the bigger question – are you willing to stand up for your rights if your actions result in being arrested, and will you know what you're talking about?

There are Florida Statutes (ss.843.02), regarding resisting arrest, and obstruction of the law – two very different things. There are also laws on the books regarding wiretapping, and this applies when there is audio along with the video recording. Wiretap laws were first enacted to apply to telephone communications, primarily, but have since been utilized by law enforcement to apply to any audio associated with an accompanying video. When it comes to wiretapping charges, they most often are not upheld because they usually occur in situations in which there is not an expected right to privacy. If an arrest or the detention of a suspected criminal happens on the street or in a store parking lot, law enforcement does not have the right to expect privacy.

The more common scenario is that someone arrested or detained by the cops for videoing them, either in a personal interaction or just filming someone being questioned or arrested, is facing obstruction of justice charges. The police will most assuredly not be thrilled if they see you are filming them, and some may go to extreme lengths to get you to stop. There are cases all over the internet of videos showing cops using what appears to be excessive force and tactics that violate your civil rights. Without a warrant, the cops cannot grab your phone, and they are not allowed to make you delete any photos or video, so long as you are not committing any type of crime.

You are allowed to record photos and video in a public place in Florida, and that includes filming cops while they are doing their job. But if you get in their way, keeping them from doing their job, you're going to be arrested. There are also a bunch of videos online in which someone videotapes their confrontation with a cop, and assertively exerts their civil rights in refusing to provide any info that the cops are asking for, like name, address and other forms of personal identification. In every one, the cops' reactions when they realize they are being filmed while dealing with someone who keeps talking about their ‘rights as an American citizen' vary widely. If you think that they aren't real happy dealing with those types of situations, you'd be correct. And the ensuing interaction can go from being let go because they don't feel like messing with you, to being detained, arrested and tossed in jail.

You may or may not, depending on the chain of events and the story the police use against you, be able to get the charges dropped or reduced. As we said, freedom to video tape and your 4th Amendment rights to be free from illegal search and seizure aren't the real issue here – the police are going to try and build a case against you for interfering with a law enforcement investigation, and those types of charges can be more of a challenge to fight.

The bottom line is that if you decide that videotaping your buddy as he's getting pulled over is a good idea, you had better be prepared for what may happen next. Even if you feel you are well within your legal rights to record the situation, you could actually spend the night in jail if the cop does not share your same sentiments. If you find yourself in trouble with the law, a criminal defense attorney with the knowledge and skills to aggressively deal with your situation is critical. No two situations are ever the same – and we've dealt with them all.

We have the answers to your legal questions, and will be happy to speak with you at no charge to see if we can help. If you feel you have been unfairly or wrongly arrested, don't make the mistake of trying to go through it alone.