Seriously? Still Not Wearing a Seatbelt? 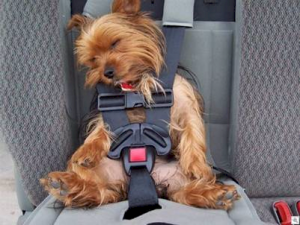 Why the cute photo for such a serious topic? Because we wanted you to read this information.

That's the only word that springs to mind when someone tells you why they don't buckle up in their car. Florida has a “primary seat belt law”, enacted in 2009, which makes it an offense that you can get cited for, without the need to be pulled over for another offense. (Unlike Florida's recent passage of the “secondary offense” texting-while-driving law, enacted in October 2013).

Ever been at a stoplight, idling next to a cop car, and feel a little nervous about getting a ticket and a fine for not having your seat belt on? Good – you should.

People who don't use a seat belt have a litany of reasons – well, excuse is a better word – as to why. And, they recite them with a straight face, which is just as crazy as the excuses themselves:

Yes, it is true that seat belt use in Florida has gone up since the law was first passed in 2009. The numerous public awareness campaigns developed by many state and national law enforcement and transportation safety agencies have been shown to be effective, resulting in increased usage. The National Highway Traffic Safety Administration's “Click It or Ticket” campaign has been a notable example of a successful effort to bring awareness to seat belt use, and numbers did go up. Local law enforcement agencies in Southwest Florida have used those efforts as a springboard to launch their own media campaigns, using print and electronic outlets to let residents and visitors know that if you get pulled over for not buckling up, you will get a ticket.

Here are some interesting stats compiled by the NHTSA regarding passenger vehicle occupant fatalities and seat belt use in Florida, for the year 2011:

Are there other states that have a lower percentage of seat belt users? Yes, there are. In fact, as of this writing, only occupants under 18-years of age are required by law to be buckled up in New Hampshire. Apparently, the “live free or die” state legislators think they are too strong and independent to be told what to do, and have really taken their state's slogan to heart.

The current fine for not wearing your seat belt is only $30.00. But it should go without saying that the costs of being seriously injured or even killed in a crash in which you weren't wearing a seat belt can be completely devastating. (And yet, we said it anyway). As personal injury attorneys, who see the tragic results of car, motorcycle and truck accidents every day, we still find it hard to believe there are still people out there who don't buckle their seat belts every time they get behind the wheel.

We strongly urge you to stop worrying about your fancy dress shirt or silk blouse, and start thinking more about the consequences of not buckling up.