DUI: What Cops Are Trained to Look For 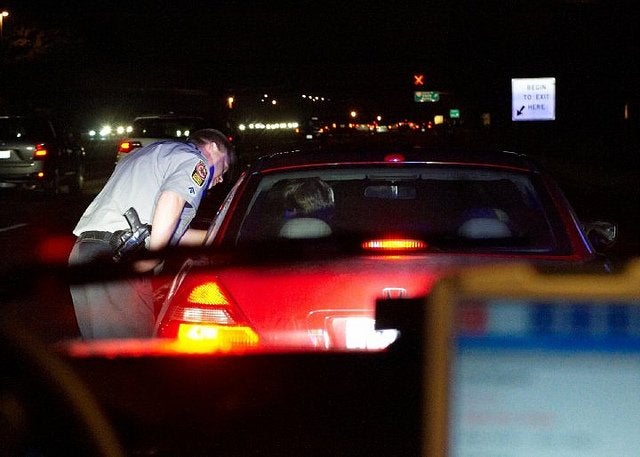 If you see a car weaving erratically on the road, do you automatically assume the driver must be drunk? Well, a recent publication distributed by the Department of Transportation's National Highway Traffic Safety Administration (NHTSA), suggests just that – plus it lists a bunch of other driving “cues” used to train law enforcement officers what to look for in potential DUI stops.

We've all heard the saying about what happens when you assume something. But in the case of the cops watching out for drivers doing something that may indicate they are drunk behind the wheel, that's pretty much what's happening.

The 19-page report, called The Visual Detection of DWI Motorists, lists multiple driving situations in which it could be assumed that the driver is somehow impaired by alcohol or drugs. It includes detailed illustrations of each situation, outlining specific activities that the cops are trained to watch for. It also assigns a point value system that supposedly ranks the probability of each action resulting in catching a drunk driver.

For example, there is one supposed “cue”, as they call them, called “swerving”, which carries a point value of 55. So, cops are trained to think that 55 out of 100 times they see a car swerving, that person is drunk. And, if they witness what they think are 2 individual driving infractions, like swerving and “turning abruptly or illegally”, which has a 35-point ranking, they are instructed to use the HIGHER number of the 2 situations, and add 10 points. Interesting math.

Seem a little arbitrary to you? Let's take some examples we see here in Southwest Florida, almost daily. Who has not been behind a Buick from Buffalo, (sorry – I had to pick some snowbird state), that suddenly and without proper signaling or warning, slammed on the brakes and swerved into the mall parking lot? Ever been following a Jaguar from Jersey that slowed down or stopped in the lane of traffic, for no apparent reason whatsoever?

Of course – we all have. Does that mean the driver was under the influence of drugs or alcohol? No, it does not. Sure, it could be true – but that doesn't mean the cops have the absolute right to pull you over, or to assume you're impaired.

I don't mean to imply that drunk driving is OK, or is something you should try, thinking that if you just avoid doing any of the things in the NHTSA report, you'll get away with it. Drunk driving accidents kill and injure thousands of people annually, and cost billions in damages.

But as a personal injury and DUI attorney, I can tell you that there are often many mitigating circumstances that may have an effect on determining whether someone is impaired – or if they should have even been pulled over in the first place. My point is that if you are driving drunk and get pulled over, there's a pretty good chance you're going to get what you deserve, and it's not going to be pretty.

The type of training that is contained in the NHTSA report is more or less treated as the “science” of detecting a drunk driver. But my experience has shown me there are so many other factors that could come into play, and sometimes things are not always as they first appear. Here's the list of roadway infractions covered in the report:

The DWI cues related to problems in maintaining proper lane position include:

The DWI cues related to speed and braking problems include:

The DWI cues related to vigilance problems include:

The DWI cues related to judgment problems include:

In addition to the driving cues, the following post-stop cues have been found to be excellent predictors of DWI.

Under the heading of “post stop cues”, the NHTSA report cites a number of situations as “excellent predictors” of a driver's impairment. Ever fumble with your license or registration when you've been pulled over? Of course – so have I. You're nervous, anxious about being stopped and can be expected to perhaps not be in complete control at that moment. It may or may not indicate you're under the influence. But the important thing to keep in mind is, in the vast majority of circumstances like that, the cops are trained to assume they've snagged a drunk driver.

Let me clear about one thing. Law enforcement officials do a good job of keeping our roads free of drug or alcohol-impaired drivers. The overwhelming majority of cops on the street know what they're doing, and go about their difficult jobs with professionalism and a strict adherence to the law. Yet there are some instances of a cop overstepping their bounds, and maybe even conducting a traffic stop in an illegal manner, which may be a violation of your legal rights.

If you've been involved in a traffic stop and feel you may not have been treated fairly, call me at 239-461-5508. I'll sit down with you at no charge to discuss your specific situation, and talk about what can be done to ensure your full legal rights are protected, and you receive aggressive legal representation.

The bottom line is don't drink and drive – it's just not worth it.