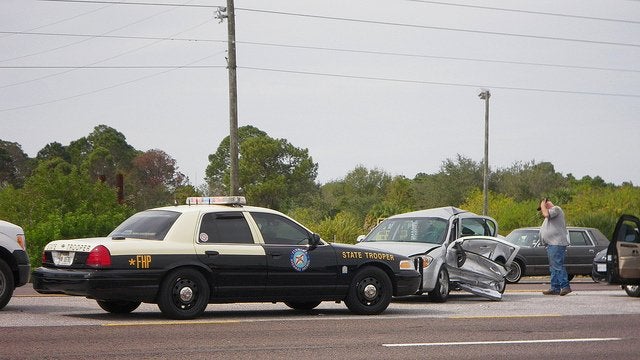 A quick look at the weekend news headlines is not a pretty picture when it comes to car accidents in Lee, Collier and Charlotte Counties over the past few days. From the less-than-intelligent, impaired people trying to cross the street to the questionable driving skills of several others, news of serious auto accident injuries and fatalities were all too prevalent on the local airwaves.

Rainy roads, speeding, alcohol and drugs and good ol' fashioned stupidity – all were apparently factors in a slew of serious car crashes. Here's a little recap of the mayhem:

The Fort Myers Police Department responded to a crash involving three pedestrians Saturday night. According to officers, three pedestrians were leaving a party when one of them, identified as Albertine Sherrod, ran towards Fowler Street and passed out in the roadway. Two relatives tried to pick her up and get her off the road when all three people were hit by a Cadillac Escalade. Sherrod suffered fatal injuries, and 2 others were taken to the hospital. Investigators say drugs and alcohol played a role in the crash. No charges have been filed against the driver of the Cadillac Escalade.

VENICE: FATALITY ON I-75

Florida Highway Patrol responded to a fatal crash on I-75 near Venice. A vehicle driven by Elani Caglioti was traveling north on I-75 over the River Road overpass. Caglioti was in the middle lane and another vehicle driven by Sally Brock was traveling in the right lane at a slower pace. Caglioti changed lanes failing to see Brock's vehicle at a slower speed, when she hit the rear of Brock's vehicle. Brock lost control and the vehicle overturned in the middle northbound lane of I-75. Brock died in the crash.

Florida Highway Patrol is investigating a hit and run involving a bicyclist in Charlotte County early Saturday morning. According to FHP, David Beck was traveling west on Gibralter Drive on a bicycle when a vehicle driven by Jessica Sawyer hit the back tire of the bicycle. Beck was thrown from the bicycle and landed on the sidewalk. Sawyer left the scene. FHP found Sawyer's vehicle on Saturday and is investigating the case. Beck was airlifted to Lee Memorial Hospital and is in critical condition.

One person died and one was injured in an early Saturday morning crash that engulfed the vehicle in flames. Around 12:23 a.m. Saturday, firefighters responded to a reported vehicle fire on Rose Garden Road. When firefighters arrived, they found a sports car on fire. According to fire officials, bystanders helped a female passenger get out of the car before fire crews arrived. The woman was taken to the hospital with major burns, but the driver was unable to escape. The cause of the crash in under investigation, but officials say speed may have been a factor.

A Port Charlotte man is facing multiple charges following the report of a vehicle burglary and a traffic crash Thursday night. Shortly after 11 p.m. Thursday, deputies responded to a residence in the 1200 block of Yorkshire Street in Port Charlotte. While they were still at the scene, a black Nissan truck with a white magnetic sign on it turned onto Yorkshire Street. One of the residents told deputies that vehicle looked like the one seen in front of their house. Other deputies in the area located the truck and attempted to stop it. The truck sped up and attempted to flee by turning onto several different streets. When the truck attempted to turn from Quesada Avenue onto Randolph Street, the driver lost control and crashed into a ditch. The driver, Antonio D. Cuyler, was taken into custody, initially on traffic related charges. Deputies reportedly found what appeared to be drugs in the vehicle.

A Naples mom is facing charges for driving drunk and injuring her three children. According to Wisconsin State Patrol, Jennifer Smith lost control of her vehicle and slid into a ditch on Highway 80 in Burnett County Friday night. The vehicle slammed into a tree. Smith and her three children were taken to a local hospital. Her one-month-old twins were airlifted to a hospital in Minnesota for treatment. The hospitals say they were all released Sunday morning and recovering from home. Charges are pending against Smith due to alcohol being a factor.

Wow. That's about all that can be said about so many serious accident injuries and fatalities that didn't have to happen. The car accident attorneys at Goldberg, Racila, D'Alessandro & Noone see so many people hurt or killed by the senseless carelessness and negligence of someone else, and this past weekend was particularly devastating.

Please use extra care when traveling on Southwest Florida's roads – pay extra attention to the vehicles around you, lay off the booze before you get behind the wheel and put down the phone.