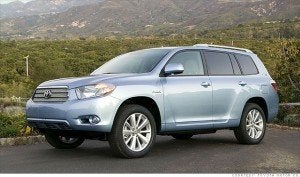 Toyota announced yet another recall yesterday, involving 2 of its models – the Toyota Highlander Hybrid SUV and the Lexus IS 350. The recalls involve a total of 369,000 vehicles worldwide, including about 235,000 in the United States, 74,000 in Japan and 37,500 in Europe.

In those models, transistors can overheat triggering a warning that in some cases can result in the vehicles stopping unexpectedly while in operation.

The second recall is for the Lexus IS 350, IS 350C and GS 350 models made between 2006 and 2011. These models reportedly can stop while being driven, due to bolts in the variable valve timing control unit coming loose during operation.

Owners of the effected vehicles who live in the US will be notified by mail.

For a company that touts itself as being focused on quality, these most recent recalls come as yet another blow to their public image. The auto maker recalled almost 250,000 Prius and Lexus Hybrid vehicles due to an issue with the braking system. That came on the heels of a massive recall in October 2012 of 7.4 million cars because of a power window fire risk, and a well-documented case of over 8 million cars in 2009-2010 involving a purported sticky accelerator problem.

The defective product and auto accident attorneys at Goldberg, Racila, D'Alessandro & Noone urge you to act immediately if you are the owner of one of the Toyota models announced in this latest recall. Unsafe products injure thousands of consumers annually, and you may be entitled to financial compensation for any injuries, lost wages from being unable to work, and money for your pain and suffering.

It doesn't cost a thing for you to come in and speak with us about your circumstances, and let us help you determine if you may have a legal case for compensation.