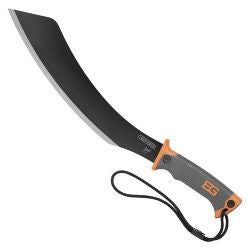 If you're planning to head out into the wilderness to test your survival skills – or, just whack down some underbrush on your property – you may want to carry something other than the Gerber Bear Grylls Parang Machete.

The CPSC has announced the recall of the 13-inch machetes, which come with a black nylon sheath. The recall is because the machete can cut through the nylon when pulling the machete in or out, resulting in serious laceration injuries. The CPSC has been notified of 8 incidents of cuts to the user's hands or fingers, with 3 of those people requiring stitches.

The product is manufactured in China, and imported by Gerber Legendary Blades, of Portland, Oregon. They were sold in sporting goods retailers and online from February 2012 through February 2013, selling for around $43.00. They also came as part of a Bear Grylls Apocalypse Survival Kit, which sold for $349.00.

If you own one of these machetes, you are advised to contact Gerber at 877-314-9130. And if you're thinking of selling your machete to some unsuspecting friend, think again – that's illegal.

Edward Michael “Bear” Grylls is a British adventurer, writer and television presenter. He is best known for his television series Man vs. Wild, which airs on The Discovery Channel.

The personal injury lawyers at Goldberg Noone Abraham remind you to be careful when selecting any consumer product. Thousands of serious injuries happen each year to people using everyday products that they assume are safe.

If you've suffered an injury caused by what you feel may be an unsafe or defective product, give us a call for a free legal consultation. You may be entitled to financial compensation.