Texting Someone Who You Know is Driving? You Just May Be Held Liable 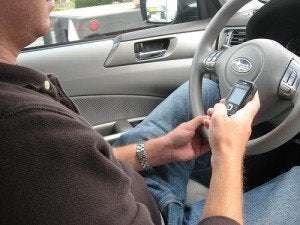 Texting while driving is a big topic in the news in Florida now, with Governor Scott poised to sign a new law today that would make the distracting practice a punishable offense.

But, here's a twist – what if you were held accountable for an accident caused by the person you were sending a text to?

Well, that just may be the case. Currently in New Jersey, the courts are deciding if they should impose a “duty of care” on people who know that the recipient of the text they are sending is behind the wheel of a car. According to an article in the ABA Journal, this question came up because of a serious accident involving a teenage driver who reportedly was texting back and forth with a girlfriend, and crashed his pickup truck into a couple riding a motorcycle. Both the motorcycle driver and his passenger lost a leg in the crash.

A state superior court judge initially rejected the injured couple's claims that the girl who was texting the pickup driver should be held to some degree of liability because she was aware that her boyfriend was driving at the time the texts were exchanged. However, the case then went to appeal, and now a three-judge appellate panel seems to be considering whether there should be some form of civil liability for the person sending texts to someone they know is driving at the time.

Referring to the driver of the pickup and his girlfriend, appellate judge Victor Ashrafi is quoted as saying, “But for her sending the text to him, he wouldn't be looking down”.

“Texting while driving has been found to be the cause of more accidents than driving under the influence”, says Fort Myers personal injury attorney Scot D. Goldberg. “This points to a much more far-reaching realm of potential liability – it will be very interesting to see how this plays out”.

Distracted driving has become an epidemic on the country's roads. If you have been injured in an accident caused by a distracted driver, you may have a case for legal action against the responsible party – and perhaps the person who was sending them a text message. Call us at 239-461-5508 for a free consultation to review the facts of your accident. You may be entitled to financial compensation for your injuries, medical and rehabilitative treatment and lost wages, if you are unable to work.