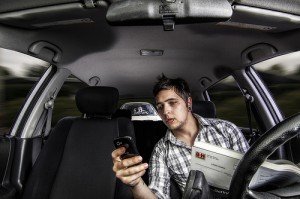 April is Distracted Diving Awareness Month, and currently the Florida Legislature is preparing to vote on creating a law making texting while behind the wheel a secondary offense. And a recent study conducted by the University of Florida shows that a majority of Florida residents are in agreement with the proposed law.

Florida is 1 of only 5 remaining states where there are still no laws on the books regulating texting while driving. With 3,331 fatalities of people involved in serious car crashes caused by a distracted driver in 2011, it's no wonder most Floridians are expressing strong support for the ban.

The study, conducted by the University of Florida's Bob Graham Center for Public Service in collaboration with the UF Bureau of Economic and Business Research, was launched in early March 2013, and is based on data collected from 371 surveys. The report's authors proclaimed that 95% of those responding were in favor of the newly-proposed law. With the legislation – known as House Bill 13 and Senate Bill 52 – expected to come up for vote very soon, the researchers felt it was important to get the new data published prior to a vote.

However, some caveats should be included on the topic. The same type of legislation has come up for legislative vote and failed for the last 3 years. Also, as much as Floridians proclaim to be against this major cause of distracted driving, another study conducted by AT&T in South Florida indicates that 49% of adults surveyed admitted to texting while driving – which is 6% higher than the number of teenaged drivers surveyed.

“Whether it's a younger driver or an older adult, we see people all the time who have suffered a serious car crash injury caused by a distracted driver”, says Fort Myers personal injury attorney Scot D. Goldberg. “It's a serious issue, and something needs to be done about it”.

Even though most people in the Sunshine State seem to be in agreement with the proposed legislation, it is important to note that the ban would make texting while driving a secondary offense, which means a driver would have to be pulled over for another infraction, such as driving without a seat belt, after which they could then be issued a citation for texting while driving.

If you or someone you love has been injured by the carelessness or negligence of a distracted driver, give us a call at 239-461-5508 to talk about your situation. It doesn't cost a dime to sit down with one of our attorneys to review your case, and determine if you may have a course for legal action and financial compensation.

To subscribe to our free downloadable reports on new laws, details on how an accident injury case works and safe driving updates, please enter your email:

Think you may have personal injury lawsuit case? Click here to contact us for a free consultation with one of our attorneys.