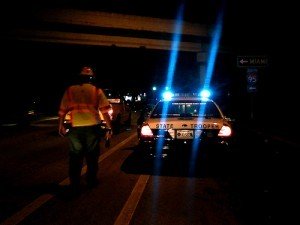 A tragic car crash caused 4 fatalities on April 3, 2013, when an SUV being driven by suspected criminals drove northbound in the southbound lanes of I-95 in Hallendale Beach.

The police were chasing the SUV from Opalocka in Miami-Dade County when the driver suddenly headed the wrong way on the Interstate and struck a minivan at the Hallendale Beach Boulevard intersection, killing all 4 of its occupants. The driver of the SUV only suffered 2 broken legs, and was transported to the hospital.

4 innocent lives lost, when out of the blue and through no fault of their own, the most unimaginable thing happens – yet another terrible reminder of just how deadly South Florida roadways can be.

Many people think of South Florida when they think of crazy, out-of-control traffic accidents, and they may be right. Congested counties like Broward and Miami-Dade, together with too much traffic and a propensity for criminal activity and bad driving mean you never know when you may be victimized by a violent motor vehicle accident.

Stay alert while behind the wheel – you never know when someone else's senseless act may change your life forever.