Fewer Overall Getting Hurt, Except in Football and Soccer 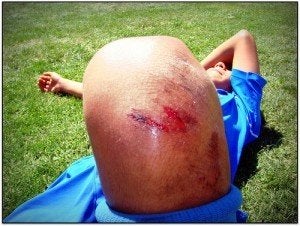 A new study of children's sports injuries shows that with the exception of football and soccer, the numbers of sports injuries suffered by children aged between 5 and 14 years-old has gone down over the last decade. The study, conducted by Dr. Shital Parikh of the Cincinnati Children's Hospital, looked at a national survey of emergency room visits at about 100 U.S. hospitals.

The research discovered that the number of acute injuries, such as fractures and sprains, in football increased by 23% from 2000 and 2010, and soccer injuries increased by nearly 11%. But the good news is that sports activities including bicycling, baseball, basketball, roller-skating ands playground use dropped by 13% during the same time period.

“For anyone with kids – myself included – few things can be scarier than getting a call from your kid's school, telling you they've been hurt”, says Fort Myers personal Injury attorney Scot D. Goldberg. “My son played high school football, and his mother and I were always pretty concerned when he would take the field”.

Football and soccer injuries saw the most increase in kids between the ages of 10 and 14 years-old, and bicycling saw the largest decrease in injuries for the 10-year period, down by just over 29%. The aggressive advocacy of wearing helmets was thought to be a factor in that injury rate reduction.

“As parents, I think we all need to make sure our children are as safe as possible when they're involved in sports activities, whether it's as part of an organized team or just a pick-up game of basketball,” Goldberg noted. “Nothing is more traumatic than watching your child suffer an injury”.

If you know of a child injured while playing their favorite sport, give our personal injury lawyers in Fort Myers a call at 239-461-5508 – it won't cost a penny to find out if you may be entitled to financial compensation for their medical bills and continued medical recovery.