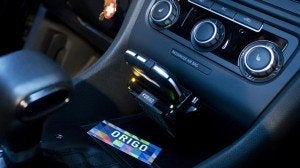 Government research shows that around 5,500 people died last year from serious car crashes caused by a distracted driver, and another 500,000 were injured – and that's just the ones that were reported.

With today's cell phone technology, there are now programs and applications that can disable a cell phone while it is in a car, and the U.S. Government is actively researching them in an effort to reduce the number of fatalities.

The problem, of course, is that these types of services – like tXtBlocker, iZup, and Zoomsafter – are voluntary. The real problem lies in getting today's drivers to change their habits, and stop texting while driving. Unfortunately, when young people are asked about the dangers of drinking while driving, their attitudes are unfavorable, and the large majority believe drunk drivers should receive the harshest legal penalties possible. Yet when asked about the dangers of distracted driving, a very small percentage seem to acknowledge the problem exists.

While there have been several Floirda legislative attempts to enact laws against texting while driving, including one that is up for vote as of March 2013, Florida is one of only 11 states where there currently are no laws for that on the books.

There are other hardware devises now on the market that actually install in a vehicle, and your Smartphone is inserted into the device. The device charges the phone, but when its removed from the apparatus, it sends an alert to a pre-established “administrator”, such as a parent or employer, which actually disables the car's ignition from starting again once the driver turns off the vehicle. Enabling the car's ignition can only be done by the system administrator. The device is manufactured by Origo, and retails for around $279.00.

Fort Myers car accident attorney Scot D. Goldberg notes that these types of new technology may be the best way to curb accidents involving distracted drivers. “Until people begin to take responsibility for their actions behind the wheel, I think we are going to see the fatality and injury numbers go up. Maybe this new technology will help”, he said.

If you have been injured because of the actions of a distracted driver, we will meet with you at no charge to discuss the specifics of your case. You may be entitled to financial compensation for your medical bills, lost wages and pain and suffering. Call 239-461-5508 for a confidential appointment with one of our motor vehicle accident attorneys.