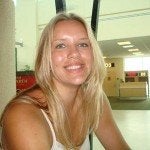 Congratulations are in order for Emma Racila, daughter of Ray and Lili Racila. Ray, of course, is one of the founding partners of the firm, so we've all watched Emma grow up as a part of our family here.

Emma was graduated from The College of Charleston, located in Charleston, S.C., in May 2009, with a Bachelor of Science degree in Political Science. Emma outdid herself by not only attending college on a full volleyball scholarship, but also by completing her four-year course of study in only three years.

Emma, who is a beautiful and talented young woman, has quite an impressive and inspiring story.

Due to some dramatic complications which developed shortly prior to her birth, Emma was actually not even expected to survive childbirth. She was born six weeks early, and in her first days of life, had to undergo two full blood exchanges and one transfusion to save her life.

Her parents were, of course, overjoyed when Emma defied the doctors' predictions and made it through. Unfortunately, when Emma was approximately three years of age, it was discovered that all of the difficulties she had faced at birth had caused serious problems with her lungs, as well as a significant hearing loss.

When the challenges faced by Emma were diagnosed, Ray and Lili were encouraged to place Emma in special classes designed for the deaf and profoundly hearing impaired, where the emphasis for her education would be based on communication through sign language. After much serious consideration, Ray and Lili felt that it was best to place Emma in mainstream classes, so that she would not have to rely upon sign language as her only means of communication. Through the use of hearing aids, as well as the strategic placement of Emma's desk at the front of her classes, she managed not only to get by in school, but she blossomed and excelled.

Throughout her years in elementary, middle and high school, Emma excelled, both academically and athletically. Emma was frequently noted to be an inspiration and an example to her fellow students, as well as her teachers, as she overcame the obstacles she faced (and in fact, never let them slow her down).

She began attending The College of Charleston in 2006, and did very well with balancing her studies with playing volleyball. Unfortunately, Emma suffered a knee injury after two years, and had to sit out a year to recover. However, true to form, she chose to see this as an opportunity rather than a disappointment, and in her junior year, she opted to take extra courses which enabled her to graduate in three years rather than four.

Emma has now returned to Fort Myers and is attending graduate school at Florida Gulf Coast University, where she is working toward a Masters Degree in Public Administration. Having recovered from the injury which temporarily sidelined her from volleyball, she was offered a scholarship at FGCU, and is very happy to be playing once again.

We extend our congratulations to this member of our GRDN family for her past endeavors, as well as our best wishes for the future. Especially when viewed in the context of the challenges she has faced, Emma Racila's accomplishments are even more remarkable and inspiring!

Now, we're all just waiting to see what she conquers next!